ABOUT THE MACAN FAMILY 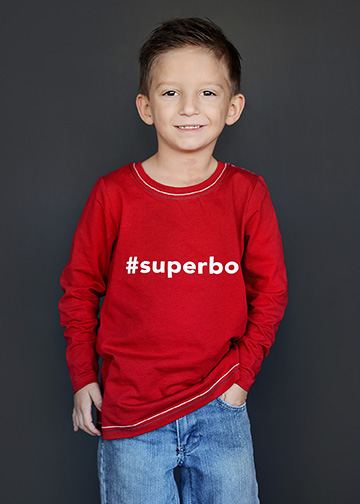 You don’t know that doctor visits, specialists appointments, and therapies are a routine part of their lives. You wouldn’t know that Bo’s blood sugar needs to be checked regularly – even at one in the morning.

Bo is ever inch an ornery, funny, vivacious little boy. You can’t see the port in his chest for regular blood draws and IV medications. The port makes it so he doesn’t have to get poked. He doesn’t have to hurt. You can’t see the insulin pump that makes managing his fluctuating blood sugar levels a little easier to manage. You can’t see the G-tube in his tummy that he has to have so his body can get the nutrition it needs. You don’t know that every day Bo fights to live, his family fights to keep him healthy, and his parents do everything in their power to make life as normal as possible for all four of their children.

If you’ve talk to John and Carolyn you will never, never hear them complain about sleepless nights, stress the average parent can’t even begin to grasp or that their medical bills thus far amount to more money than some people will earn in a lifetime.

He has a genetic condition so rare that a doctor at the National Institutes of Health has dubbed it “Bo Syndrome.” It includes Type I diabetes, chronic diarrhea, growth hormone deficiency, thyroid problems, seizures, and chronic lung disease. He also has granulomas on his lungs, liver and in his bone marrow. The granulomas are an infection that will never go away. He also suffers from Immunoglobulin A (IngA) which causes infections to set in faster but also won’t allow his body to ﬁght them off. The Macans have traveled to Cincinnati Children’s Hospital, Boston Children’s Hospital and most recently to Maryland so that some of the country’s top pediatric specialists at NIH can see Bo.

Every day of Bo’s life has been a struggle but this past year brought on more than most families could handle. In 2013 Bo spent 127 days in the hospital. Carolyn was by his side every one of those days. Bo has endured 16 sedation procedures, 2 chest tubes, 6 bone marrow biopsies, a liver biopsy, 2 lung biopsies, had an infected chest port removed, received an IJ line (a temporary central line in his neck), had 3 MRI’s, 5 contrast CT scans, 19 chest x-rays, 17 abdominal x-rays, 10 spinal taps, 8 rounds of IVIG, 15 iron infusions, 19 blood transfusions, received 3 rounds of platelets suffered over 20 seizures and had fluid drained from both of his knees. On October 28, 2014 he celebrated his fourth birthday in the hospital, away from his brother and sisters. His tiny body has been utterly ravaged by these “owies”, as he calls them, yet he and his family continue to fight.

Bo and Carolyn are regular guests on the pediatric floor at KU Medical Center. Hospital stays have become almost routine – it’s just something their family has learned to deal with. Carolyn rarely leaves his side- and when she does it’s for minutes at a time. Sleeping through the night is something she hasn’t done in over three years. “Tired” is her normal state of being.

The Macans’ family and friends regard them with a sort of dumbstruck awe. We know they wake up every morning with the knowledge that their baby boy has a frighteningly uncertain future. Truly understanding the reality of Bo’s health is a terrifying, humbling, unimaginable feat. He’s such a spunky fighter and has endured more in his life than any child should have to bear. There’s no doubt his determination comes from his parents, brother, and sisters.

They are amazing. Bo. Carolyn. John. Leksi. Johnny. Brooklynn. They are an extraordinarily family.

Sherry Baldwin - While researching IPEX, I came across your story. I am following you on FB and saw that you had flown to Boston. My cousin and her grandsons Tre 2 and Bryson 1 arrived at Cincinnati Children’s on Sunday to prepare for Bone Marrow Transplants.

Both boys…brothers…were diagnosed with IPEX this year.

Before the boys were diagnosed, I had never heard of IPEX. It is just so unfair.

I will continue to pray for Bo and your family.

Lois Winningham - Does blood type matter? I am A-, 60 years old, healthy. If I am not too old, I would be glad to share my stem cells!

Carolyn Macan - Hi, Lois! We appreciate your willingness to help. Blood type does not matter, however the cutoff for the bone marrow donor registry is age 44. You can still make a difference for Super Bo and others by spreading awareness about the importance of joining the donor registry. Or you can make a financial contribution to the Be the Match Foundation. http://www.bethematch.org

#ThisIs40 Week 4 in Photos Project 365 of my 40th Year - […] 1st:  Tonight I volunteered at a bone marrow drive for Be The Match in honor of Super Bo. (Please click here to read Bo’s story!) A bone marrow transplant would greatly help Bo and so many other people […]

Melissa Richmond Sawyer - We are in the process of having Bo be one of our recipients for a Fundraiser Called Bow’s for Joe. I am dear friends with Hannah and Marc. I have had the pleasure of meeting and playing with your Brookie too. My girlfriend makes hair bows and donates 100% to families in need that also have a medical condition. I hope whatever small amount we can raise will help you all in some way.

Cecilia Alcantar - God bless you❤️ I am praying for you and asking that God lift each of you up. May He grant you peace. Philippians 4:13.
You are fighters and so strong. I am so proud of you and your beautiful family. What a blessing your children are in this world .

© 2023 Macan It Happen|ProPhoto4 by NetRivet